Hurricane Sandy took out the Great Gull Island dock in 2012. The American Museum of Natural History received a grant from FEMA to repair the dock. In October 2015 we heard from Mohawk Northeast, the construction company building the dock, that on October 14/15 the last pieces of the dock would be put in place. The pictures you see in the attachment were taken by Keith Neilson, Project Engineer on the dock.

Of course, we wanted to see the dock and use it as soon as possible. I called Captain Main and he suggested we go to Great Gull on Wednesday, October 21, 2015 when calm seas and warm weather were predicted. I went to Connecticut on Tuesday and stayed overnight with Jim and Barbara Sorensen. Barbara drove me to  the New London Railroad Station Wednesday morning where Lottie Prushinsky met me. Lottie and I drove to Captain Main’s. Bob Kane had already arrived and we all headed for Great Gull at nine o’clock. By 9:30 we all climbed out on the dock and viewed the wonderful long vista between the loading dock and the island itself.

The dock is beautiful and looks indestructible!  Lots of steel has been employed to hold it together. The pieces linking the loading dock to the shore are held together by heavy metal clips. Steel pieces hold the dock to the pilings and also to the cement building on the shore where the land end of the dock is anchored. The dock is ready for use so come out in 2016 and explore the new blind built be Matthew Male with help from Bob Kane, Stirling Danskin, and Roland Buzzard. Look forward to seeing you – more on this toward spring. 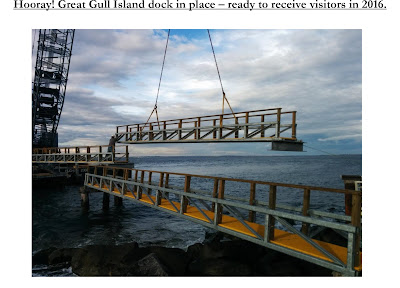 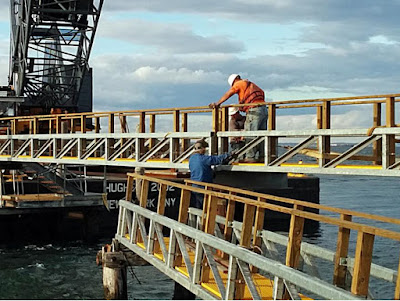 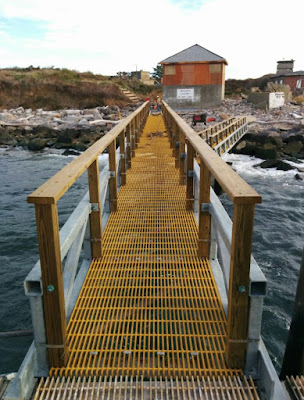