In the following account I thought we could use Peter Paton's Common Tern pictures throughout report.  He took them in Massachusetts, but they looked so beautiful I thought it would be fun to feature them in the blog.  He has given us permission to use them. 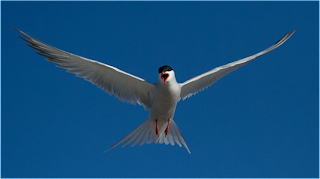 At the end of April it was hard to get to the island because of high winds and bad weather, however, David Roach and his assistants got out for a day on April 27 to spray some of the vegetation in preparation for the season as well as expansion of the terraces for Roseates in the fall. On April 27 and May 4 Joel Stocker took overhead shots of the island with his model helicopter showing redistribution of sand and gravel as well as chunks of the island removed by Sandy and a winter storm after Sandy. He took a series of wonderful pictures which will be easy to compare with his pre-sandy shots taken last year. 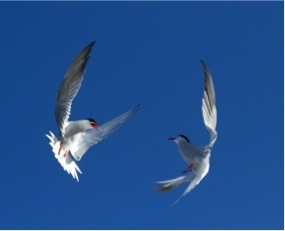 I had stayed overnight with the Sorensens and Jim and I drove to the boat on Saturday morning.
Lottie Prushinski and her grandchildren, Glenn Prushinski and Evan Bender came out with a group of volunteers May 5. Lottie, Glenn and Evan took the shutters off their windows because they would stay overnight. They also set out the water troughs to catch rainwater for the following weekend when we would move to the island for the season. Lottie took the visitors to the western end of the island to put the Roseate houses in place; the visitors left and Sunday.  Jim, an old hand on the island, set out immediately to look for bands when we landed. These are bands, mostly from young from other seasons that we missed when we collected bands of dead birds annually. Jim collected about 30 bands, which is a fantastic total for spring! Lottie, Glen and Evan cleared some areas on the island for the tern’s arrival. I watched the terns Sunday morning. There were some over the island and 150 to 200 fishing about half way to the mainland. Most disappeared from over the island by about 10:00 am. Glenn reported seeing about 150 fly over the island from the north and head south. We saw no more terns near the island after that.

As we approached Great Gull on May 10 to begin the season, a pair of Common Terns a well as a single Common flew over our wake about 20 feet above the water occasionally, cocking their heads and eyeing the water. I had never seen terns in this hemisphere do this, but had on occasion observed it in Common Terns following boats off the east coast of South America. I thought it might mean that bait fish were in short supply near Gull Island.  This was later confirmed by Captain Matty who brings us to the island. 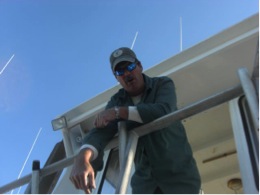 Our landing party included: Stirling Danskin, Jillian Danskin, John Danskin, Melissa McClure (who drove our gear from NYC), Lisa Neild, Lottie Prushinski and Bob Kane.  Jillian and John each brought pastry and we enjoyed sampling them throughout the weekend. Eleven members of Americorps arrived at about 5:00 pm. Once on the island people from the first boat began projects immediately.  Bob and Lisa replaced a window blown out by Sandy, then Bob made a new door for the banding room and installed it. Lottie unpacked the food and put it away. She later, with help from Americorps mended the wire around the central and eastern gun emplacements and initiated raking parties to clear remnants of Pokeberry which cluttered potential nesting areas of many of the Common Terns. Melissa, throughout the weekend, served fantastic meals, straight from the grill she and Dale Dancis gave to Great Gull Island last fall.

On their first day Americorps built 12 Roseate Tern shelters and set them out by 11:00 am.  They also set bricks on existing Roseate shelters and then divided into two groups, one group dug a compost pit, and the second group sorted gutters that had been blown off the buildings into "usable and unusable" piles and brought in debris from all over the island which included a number of tires. Stirling carried two packages of shingles to the north building and began to patch the roof; later Bob helped finish the roof and patched the roof of the second building that sustained damage from Sandy. Stirling carried the battery to the tractor and Bob then started the tractor. Matty picked everyone up on Sunday except Lottie and Bob, who stayed for the week. Before the boat left Jillian polished every surface in the kitchen until it shone. During the week Bob organized the nails in the tool room, and repaired and installed the weather vane. 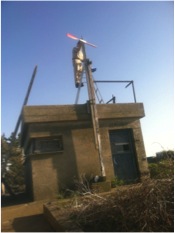 Lydia Thomas, our office manager, had determined the measurements for the new blind covers , working with measurements of the tops of the blinds as well as measurements she made of an old top. The new covers, make the plywood sides of the blinds formerly used unnecessary.  Lydia worked with Bill Ginty, vice-president of Durkin Awning and here is the final product in place! 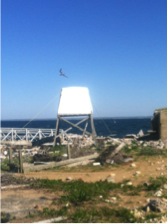 Bob and Lottie put one cover on the blind at the dock and it is standing up well in a variety of winds. Bob also measured the blind top to make small adjustments in the blind design so the covers would fit snugly and ordered candles to supply the island during the summer.  In addition he bored holes in several pieces of wood to make candle holders which are in great demand. Lottie, in addition to raking the areas of the island not yet raked, washed all the dishes for the week as well as the kitchen floor!  Both Bob and Lottie worked hard during the week and accomplished a lot! 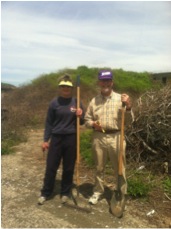 The weekend May 17 Melinda Billings, Don and Judy Estes, Jill Hamilton, Hu Plummer landed on the south beach to stay through Sunday.  However their visit was cut short by weather.  During the time they were on the island Don and Hu cleared stretches of rock edge for Roseates and set out a few of the tires Americorps had collected along some rocks where former Roseate nest sites were blocked by dirt washed into them by Sandy. Judy numbered 500 Roseate tongue depressors, getting that group of markers off to a good start! Jill found an Oystercatcher nest. 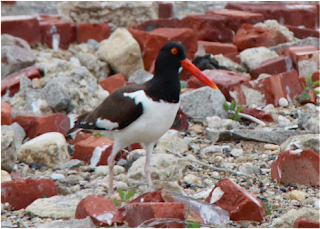 Melinda, after treating everyone to her espresso coffee to start the morning, took some wonderful pictures showing some of the effects of Sandy, the tire set up and the nesting Oystercatcher.  She also took some good pictures of prospecting Roseates from a blind near some Roseate houses at the western end of the island. 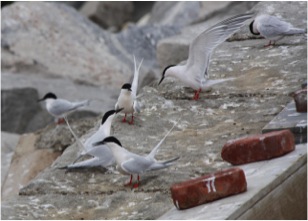 Matty arrived at 6:50 am May 19 to take people to the mainland, with the exception of Jill, who stayed for the week. 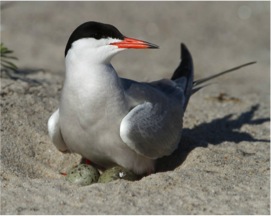 Boats cancelled for Memorial Day weekend because of weather.

May 28 boat brought Elsa Josephs and David Ferris who had waited in Niantic for four and three days respectively, Jill took the boat to the mainland.

May 30 Captain Ryan brought Dale Dancis, Artie Morris, Lottie Prushinski and Ryan Prushinski and the next morning May 31, on an 8:00 am boat the following arrived: Cheryl Blum, Julie Blum, Debbie Buzard, Nicole Buzard, Paige Buzard, Jenny Freeman, Lynne Herzog, Anne Via. Elsa took the boat to the mainland. Ryan prepared the check aprons the afternoon of May 30 so they would be ready for nest marking the morning of May31.

The group began marking nests on the morning of May 31 shortly after the boat arrived. Everyone worked hard and consistently, and by Sunday morning a total of about 5700 had been marked.  Nests are still being initiated and the numbers of nesting Common Terns will probably equal or a little surpass nests marked last year. As yet, the Roseate team has not begun marking, but there seem to be lots of Roseate Terns in all areas of the island and I am anxious to see how many nests are marked next week. We all had fun marking Common Tern nests in spite of the heat and humidity during the middle of the day. I was pleased that the Buzard family was able to come for the weekend, making an extra effort to get here as Nicole's prom was the evening of May 30 and the boat to Gull was at 8:00 am the next morning. 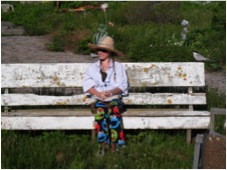 Each day Paige led the check of the western end of the island and gave us a tally of total nests marked each day, for the whole island.

On Saturday afternoon there were a number of different projects.  Dale and David looked for Barn Swallow nests in a number of the fort structures.  Debbie, Lottie and Ryan checked the Big Gun emplacement for tern nests and then joined the Barn Swallow group. Jennie, Lynn, Lottie, and Anne weeded the Roseate terraces and were absolutely delighted that, as soon as they finished, the Roseates were all over the terraces! Later on Saturday Paige led a tunnel tour for people who had not seen the tunnels.

Saturday was Anne’s birthday.  Lynn brought out three different kinds of cheese to have with crackers before dinner and Halvah for dessert. It was a jolly dinner and festive to have the cheese. Matty arrived at 6:00 am on Sunday morning and everyone left except Dale, David, and Artie.
Artie Morris joined us for a week, May 30 through June 6. Artie has not been on Great Gull for 23 years and it is great to have him back! He, of course, has taken some wonderful pictures and showed us a number of pictures he has taken in other countries.  He took some wonderful pictures and helped us with nest check as well. In addition, he brought his own food and cooked great fish he brought for three meals and showed us how to cook squash, using his own delicious recipe.  Dale grilled when Artie did not cook and washed all the dishes during the week in addition to doing check regularly. To date we have marked 6,600 Common nests, which puts us about where we were last year at this time or possibly a little ahead. The Roseate team will mark nests this week.  To date the terns seem to like the Sandy reconfigured island. 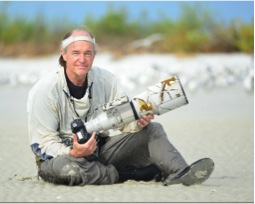 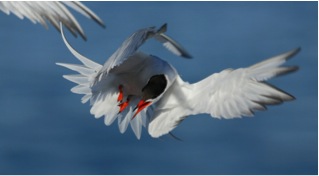 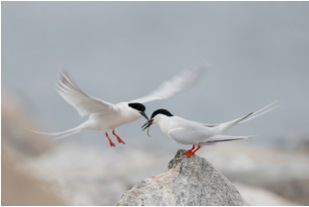 We were very pleased to hear that Brendan Murtha won an American Birding Association scholarship to one of the ABA Young birder Camps this summer.
Posted by HELENHAYS at 1:33 PM 1 comment: