Roseate Terns, Sterna dougallii, have black bills during the nonbreeding season and acquire varying amounts of red on their bills during the breeding season. The timing of the acquisition of the red varies geographically and the amount of red acquired by individuals may vary within a season and between seasons (Cormons 1976). What is the pattern of acquisition of red on the bills of Roseate Terns in your area? Do you know a photographer in your area who might be interested in taking pictures showing bill color of Roseates when they arrive in the colony, and later pictures of the bills of incubating birds preferably on nests of know initiation date, and still later pictures showing the pattern of red on bills of birds brooding newly hatched chicks, and finally the amount of red on the bills of birds in the colony late in the season? We would certainly welcome pictures of this sort for the blog – so do take some and send them to us! 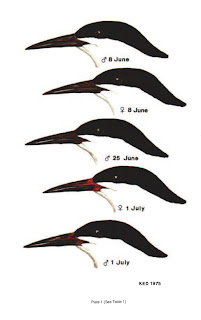 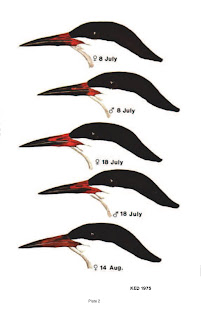 Roseate Tern bill color change in relation to nesting status and food supply by Grace Cormons in Wilson Bulletin 88 (3): 377-389.  Two color plates by Kathy Duffin based on pictures taken by Grace and her husband Matt Cormons during a watch at a Roseate Nest on Great Gull Island.

For Roseate Terns nesting in Puerto Rico most of the bill turns red by the peak of the nesting season,  retaining only a black tip. 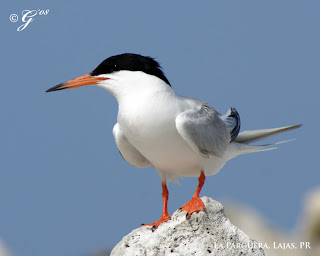 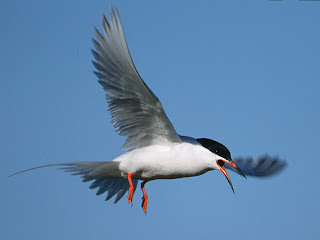 
Tree took this picture in August of 2000 when many chicks just starting to hatch in the colony.  He reports that Roseate Terns off South Africa assume red on the bill prior to chicks hatching. 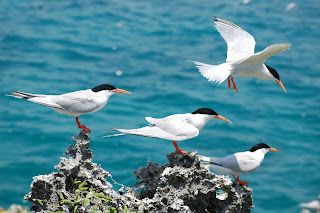 In the middle of the breeding season on Okinawa the entire bill has become red.

Anya Lilith Auerbach's article.
Posted by HELENHAYS at 11:57 AM No comments: