Surveying and netting Common and Roseate Terns on the north coast of Brazil, January 25 – February 10, 2013.


Great Gull Island participants: Grace, Matt and Peter Cormons, and Helen Hays working with Alberto Campos and members of Aquasis in Ceara, Alexander Lees in Para and Pedro Lima and a team of five in Sergipe. Mike Dawkins, from Australia, joined us on February 4 to help with netting and complete a molt study of Common and Roseate Terns. 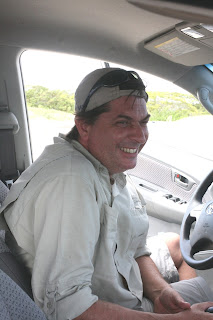 Alberto Campos met us at the Fortaleza, Ceara airport January 25 and drove us to the hotel where we slept well after the nine hour flight.  Alberto picked us up the following morning and took us to Aquasis to see the new manatee facility, a very impressive set up.  The center includes a number of different size pools, where young manatees can swim and grow as well as two rooms for surgery. In Florida it was found young manatees have a higher survival rate in captivity if they are put in a pool with a female.  The researchers are hoping to find a female to accompany any young manatees brought to the center.  Until now Aquasis did not qualify to keep young manatees and had to fly them to Recife to be raised.  It is thought that manatees raised in captivity often return to the area where they are released.  The Aquasis facility will enable Aquasis personnel to raise young manatees they find and release them in the area near Aquasis, thereby increasing the chances these animals will return and help increase the local population.

Late in the afternoon we checked a beach where we had seen Roseate Terns in the past and where, Marcelo Holderbaum of Aquasis had seen banded Roseates in 2012. The tide was too high to see much of the beach, but we did see a blue plastic banded Semipalmated Sandpiper.  Alberto said it had probably been banded by a group from New Jersey Audubon which has been banding this species in the state of Maranhão. 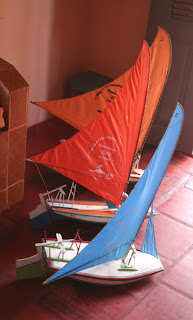 Our next stop was the village of Quixaba where the fishermen are helping us with a coastal project to raise awareness of the terns and protect them.  We were greeted by many of the people who work annually to put on the Tern Festival, a celebration recognizing the importance of the terns to the community. 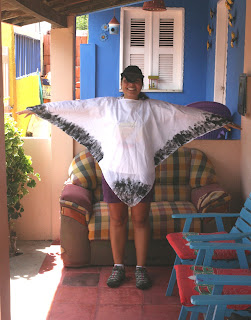 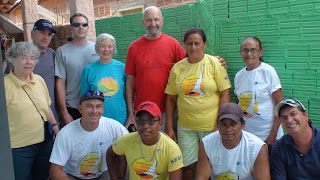 Ana Jesus modeled a tern costume made by Maria da Silva worn in the 2012 Tern Festival.  We then sat down for lunch, which was delicious and was made by Maria and Joseline da Silva. After lunch some of the students in the village performed songs and dances taught them by the village elders.  The words of one of the songs mention terns and the importance of protecting them because they show the fishermen where to fish. 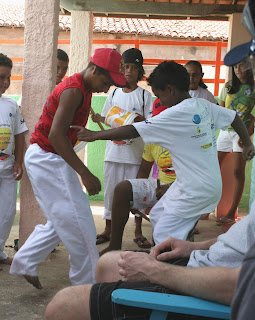 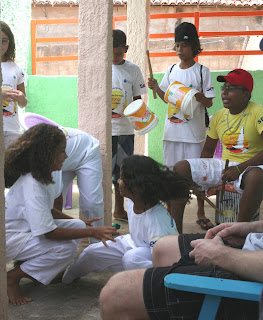 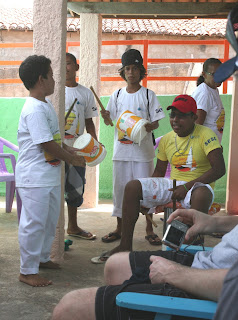 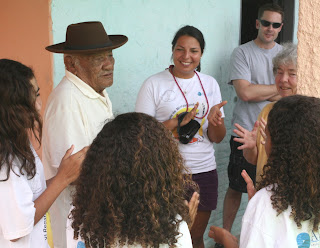 After lunch we thanked all the performers and said goodbye to everyone and began driving east along the coast with Alberto. After the first day Alberto changed cars so we could drive on the beach.  Although we did not see any terns we did see a small group of Red Knots in which there were a number of color-flagged birds.  Alberto took pictures of these and the numbers on the flags are quite clear. We are looking for information on where these birds were banded. Throughout our trip in Ceara we appreciated Alberto providing the truck, driving, choosing a place to stay and lending us Brazilian Real when we could not cash traveler’s checks.  Special thanks to Jason and Peter who rode in the open back of the truck January 27 - 29! 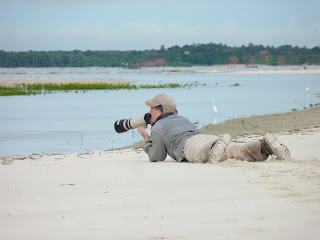 Alexander Lees, Laboratorio de Ornitologia/CZO, Museu Paracnse Emilio Goeldi, checking for terns on the north coast of Para. Alexander guided us in Para and netted with us on Ilha do Saugra.
(PHOTO NÁRGILA MOURA) 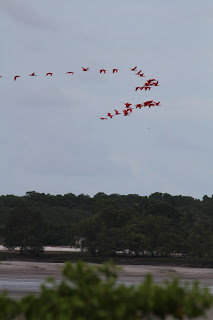 Scarlet Ibis over the shoreline in Para
(PHOTO ALEXANDER LEES)

On January 29, we returned to Fortaleza and flew to Belem in the state of Para.  We arrived about midnight and were very glad Alexander Lees, who would join us the next morning, had made a reservation for us in a hotel there. After meeting Alex the morning of February 1, Peter rented a car.  He did all the driving in Para and drove us to Salinopolis the first day. Alex knew the area very well and we checked the beaches east and west of this city. On our second day in the area Alex and Peter spotted two Roseate Terns and a few Common Terns west of Salinopolis. Alex had seen color-banded Roseates in this area in August and October 2011. As we drove along the shore Alex, who spoke fluent Portuguese, checked at every dock we passed to ask the fishermen if they had or knew of anyone who might have bands.  He told the fishermen we did not want the bands, but would like to read the numbers and we then would return the bands.  The fishermen knew about bands, some knew someone who might have one band, but they did not seem particularly interested in bands.  I thought this was encouraging because it might mean, in this area, at least, there was little interest in collecting bands worn by the terns.

Returning to Belem on February 4, we flew to Salvador to meet Pedro Lima, probably the most skilled netter in South America.  Mike Dawkins, who had flown in from Australia, joined us for breakfast the morning of February 5. He hoped to finish a molt study of Roseate and Common Terns he began when we netted with Pedro in 2010. After breakfast we drove to Ilha do Saugra to set up the nets.  Everything went well, with one exception. In the middle of the first night Pedro had appendicitis and left to have his appendix out the following day. Zildomar took over for Pedro and we all were glad that we had a boatman spending the night who could take Pedro in. 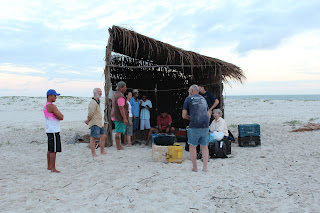 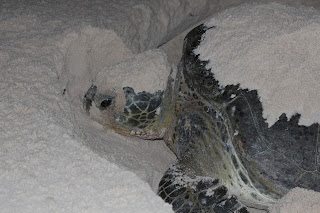 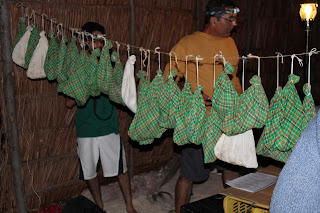 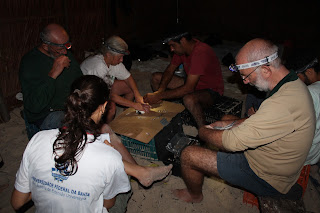 Netting went well. We netted several Great Gull Island birds and Mike collected enough data on molt to finish his study. We spent the last night at Pedro’s because he lives near the airport and trying to get to the airport during Carnival in Salvador would have been impossible. Pedro’s wife Rita helped us with everything and saw that we were well fed.  Pedro’s son and his wife Iliana visited and Iliana helped Rita in addition to bringing her sons to meet us.  It was all fun and Pedro seemed well on the way to recovery when we left.